Mission accomplished, at the expense of realising how rubbish I am at speaking German and thinking on my feet. After an easy cycle to Rose Bikes, I approached the bike-parts counter bearing the email verifying my order. The parts-assistant eventually understood from my fractured gabblings that I’d reserved a USB-werk and that I  expected Rose’s workshop to fit it to Lev. He took me and the device to the workshop, but the workshop bod said that they were fully occupied today.

This was not what Rose’s custermer-service bod had said – she had stated that the workshop would not be busy on weekdays and would be able fit the device. I really wanted them to do it because when I’d done so previously, I’d got little to no power from hub-dynamo to iDevice.

Some frantic fumblings through mail folders on my iPhone (mail folders on iDevices have the worst UI ever) found the relevant email, and the workshop promised to have Lev fitted up within an hour. To pass the time, we nosed at accessories, clothing and food. Elly bought a new rain-jacket (her current one is dying) and some extremely padded fingerless mitts, while I bought a bell for Lev (a must-have in the places we’ve cycled through this trip) and a wee double-sided carrier to mount on the front of Lev’s crossbar. (The workshop also mounted the USB-werk on the front of the crossbar but the carrier fits over it quite nicely.) I considered buying a handlebar mount for iPad minis but sanity prevailed – for the moment. Eventually I will need to see bigger sections of maps as I cycle – zooming a map on a small screen isn’t a precise art.

We then retreived Lev and Fidel and set off towards Duisberg. I can’t tell you how good it is to hear the wee chime as jPhone starts charging each time Lev gets moving. The USB-werk doesn’t prevent jPhone discharging somewhat at the speeds we did today – about 15mph is needed to push enough power into the device – but he lasted all day. Yee-deedledee-hah!

The rest of the day’s cycling was an unpleasant slog against headwinds and through urban areas. I don’t mind cycling in cities but I hate cycle-paths that bump up and down kerbs, and have traffic-lights stopping momentum-saving dashes across side-streets. I have a horrible feeling these are meant to be obeyed. Elly’s blog explains more, and here are Lev and Fidel outside Rose: 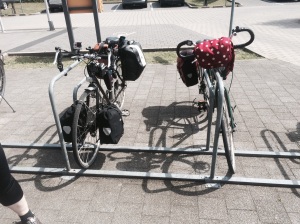 On the left, Lev has

Too much – next time I need to wear bike shoes that I can also walk in. (So I might revert to toe-cages and walking shoes with fairly stiff soles.) I also need to take less kit. Now I can charge devices on the move, I won’t need spare USB-powered lights. An iPhone 6+ should have a big enough screen for easy naigation: my current iPhone 5S can be its backup, the current back-up (an iPhone 5) can be jetissoned, and the iPad can stay at home. I also should carry just one change of lycra and one set of civvies. Kit can always be washed if it gets too manky. Waterproofs aren’t needed because they’re too much of PITA to wear, and a cold-weather jacket in continental Europe in the summer – what was I thinking? It’s 1am in Düsseldorf as I type this and the sweat is rolling off me.