Mission accomplished, at the cost of distending my belly like a camel’s hump. I am a ventro-bacter!

Our start was delayed by a visit to Lucky Bike World, a huge bike remainders store just next to our hotel in Duisberg Hauptbahfhof. I bought another bell and some energy bars (unfortunately no banana bread was available), while Elly obtained padded leggings to replace ones that had died.

We decided not to cycle far today because it was due to be very hot. Even so, we took just under 2 hours of cycling time (plus an hour of stopped time) to do just under 21 miles. This severe lack of speed was partly because this part of Germany’s cycle-paths are relatively crap. Thay are generally the roadside edges of footbaths, built of tarmac or flat interlinking brick, and undulate with domestic car-exits and bump up and down kerbs as they cross roads. There are also bike- and pedestrian-focussed traffic lights, and we didn’t feel we could disobey them. Because Lev is loaded up, he and I have almost no aceleration. Once we get going, we can cruise at 13 to 15 mph. But we just aren’t able to get to anything like a decent speed before a kerb, deviation or traffic-light-controlled road-crossing stops us again. Bah!

However, please note the word relatively – at least Germany has cyclepaths that let you go wherever you want in almost total safety so long as you obey traffic lights. All sorts of folk use them, from roadents on carbon-fibre speed-beasts to ancient omas and opas on carrying their shopping on equally ancient machines. Front-wheel dynamos powering lights are the norm, as are bike handlebars enforcing upright cycling positions. If the cyclist is under 30, he or she is likely to be using his or her cellphone on the move, and it’s safe to do so. If you crash, you will only hit other cyclists. And because you’ll have been cycling since you were 3, you won’t crash – skillful avoidance is almost hardwired.

It was stinking hot as we arrived here in Düsseldorf and threaded our way through Düsseldorfers and tourists along the Rhein promenade to near the city centre, then picked our way along inner-city roads to Hotel Hillesheim. We got here about 3pm, and were able to move to the shade of trees along Königsallee for a picknic lunch. We then meandered to the Schiff-farht Museum to learn all about the sorts of boats that inhabit the Rhein, the cultures that accompanied this, how the local princelings taxed goods coming through their stretches of the river usw. Possibly the best part was a video-game trying to steer a virtual barge around a meander. Elly ran out of time just before she docked hers but I crashed.

We then shuffled to the Rheinturm to see Düsseldorf from on high – scary but very pretty, and then to a cheap oriental fast-food joint for dinner. I think I’ve eaten the best tofu in Germany there – yeehah. And I’ve not eaten stupid amounts of food today – double yeehah.

It’s nearly 11pm and it’s far to hot to sleep, even with the windows wide open. In a way that’s helpful, because I’ve not written about yesterday yet. Elly has had the genius to find a friendly, family-run hotel which is very bike-friendly (Lev and Fidel are locked away in off-street parking, with a bar selling Diebels Alt (possibly the best beer so far this trip), a clothes-drying line in the shower, and a wee garage-shop nearby selling the fluids I crave, in a city that has plenty to do – and we’re staying here two nights so we can do some of it. Thank you to my lovely lady! 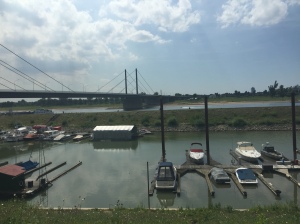 The Rhein from Düsseldorf yacht club (1)

The Rhein from Düsseldorf yacht club (2) 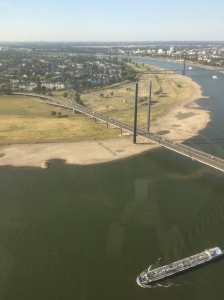 no idea where this is 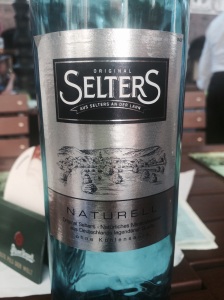 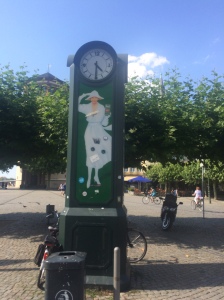 Display in the Schiff-fahrt Museum 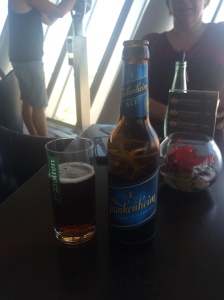 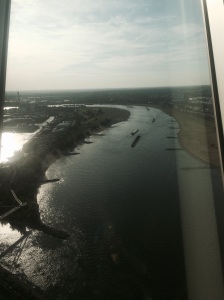 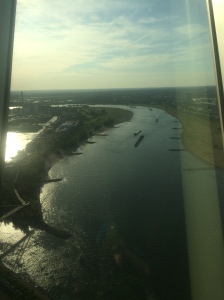 sticker on a lamppost

sticker on a lamp-post

our shower has a washing-line 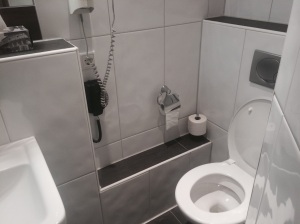 and our toilet has a phone