My ‘professional’ side has taken up the reins of Online Identity Assurance. That’s probably because I was wearing my 2018 Napier PRIDE t-shirt at the event.

Being involved, no matter how tangentially, with the Scottish Government’s work on online identity assurance (OIA) is important to me for at least five reasons.

END_OF_DOCUMENT_TOKEN_TO_BE_REPLACED

Elly has described a bit of magic that happened today.

‘Hello, world!’ from a cafe overlooking the IJ from the back of Centraal station. First thing to report to Napier friends and colleagues is that I’ve switched off my Napier e-mail. Personal email, text etc are welcome, although immediate response is not guaranteed, sorry.

It’s pleasingly ironic that netween us Lev and I had one good leg and one good pedal, not in contact with each other. Oops! Even more pleasing that the magic is here, despite a couple of shakedown breakages. Long pauses to watch the world and hydrate ourselves.

Calling all information science #phd students! #iDocq2018 registration is open until 28th April 2018. See below or visit http://idocq2018.wordpress.com for details.

Register here, and send in an abstract for a PechaKucha here 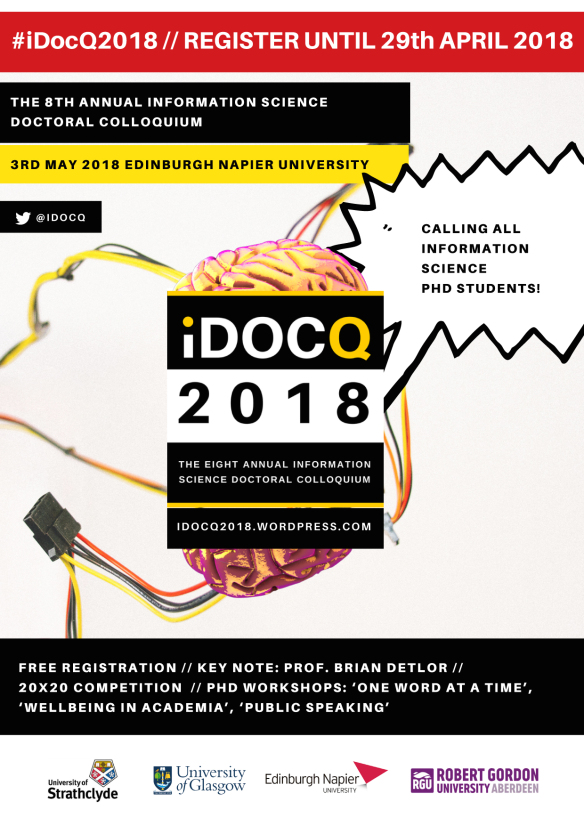 So we’ve just done a solstice-night cycle, part of Edinburgh’s Festival of Cycling.

We were started in groups of 20 from Leith Cycle co – Elly and I were in the second group. There were a few hijinks as we rejoined the road at Portobello – a plastic pint of beer narrowly missed one us. Apart from that, the ride was uneventful but at a fairly fast pace for us. (Real roadents may well have left us for dust.) The 18 miles to Gullane took us 1 hour 23 minutes (13mph average).

Tea and yummy cake were waiting for us at Gullane – but so was the rain. Somehow the first group came in after us – I think they took a wrong turning and went through Longniddry village.

The group structure fell apart at Gullane. A number of people wanted to get going, rather than stand around getting cold and wet, so we set off with a hearty shout of ‘Anarchy in East Lothian!’ (Er, that’s me exercising my poetic licence.) The wind was against us and it felt as though we were going slower than before – but we actually took two minutes less to get back. Leading in the dark is weird, especially with the somewhat hypnotic effect of my flashing front lights.

The actual finish, and celebratory breakfast, was in a church further into Leith. Elly decided to simply go home and to her bed but the calories and caffeine lured me. I’m not sure a baked-bean and mushroom roll has ever been so welcome!

I’m quite pleased that we did around 14mph for the uninterrupted parts of the ride. Traffic lights and other impedimenta took our start-to-finish average down to 13·3mph. Here’s the inevitable map. I should join a road-club and see how Lev’s heavy steel frame and my legs compare to roadents’ carbon-fibre speed-beats and thunder-thighs.

Happy second-half-of-solar-year to you all!

For a long time, perhaps predating OSX, command-clicking on a Finder window’s title bar has given a menu enabling movement up the folder structure. (It’s a compact vertical equivalent to OSX’s excellent column view.)

This allows movement up the folder structure on the external web server. Hurrah!

Incidentally, the graphic in the Finder window is the unified theory of acceptance and use of technology. That’s a simple theory. If you want complex, look here – and scream.

Napier has confirmed I’ve passed the taught part of my MSc and may ‘continue with my course’. So I need to get on with my dissertation!

For your delight and delectation, here’s the letter and confirmation of final grades for my taught modules. (Click the thumbnails for full-size versions.)

I haven’t a clue what the acronyms mean. Assuming these grade-bands were used throughout the marking, and that my marks were in the exact centres of my bands, my average mark works out as 84% and hence my average grade would be D2.

If I’ve recorded the actual marks correctly on my infographic, I’ve achieved 85·79% of available marks so far, leading to a grade of D3.

I’m not bothered by the difference between D2 and D3 – as far as I’m aware, my final grade will be fail, pass or distinction. To get a distinction, I need to hand in a distinction-level dissertation. I’m not confident of that.

Maximising the impact and value of library and information science research

Scotland - Made for Cycling

Democratic Audit monitors democracy and freedom in the UK through a regular blog, a series of democracy assessments and reports