We’ve left the Elbe, and are heading east (apart from the occasional meander) along the Havel to Berlin. Currently, we’re in Rathenow (Wikipedia), in Brandenburg, although today’s route has taken us in and out of Saxony-Anhalt.

The first part of the route was again along the Elbedeich, but this time not along the Elbe itself. Instead it was along a canal that runs parallel with the Elbe for at least 10 miles. The sluices on this photo suggest it’s about controlling the main river’s flow: 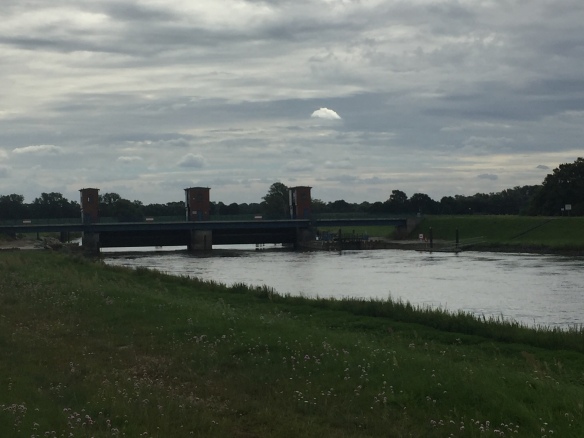 Also, there are canals with sluices and locks between the Elbe and the Havel where join and where they are roughly parallel, and quite a few water-control features on the flood-plain between them. 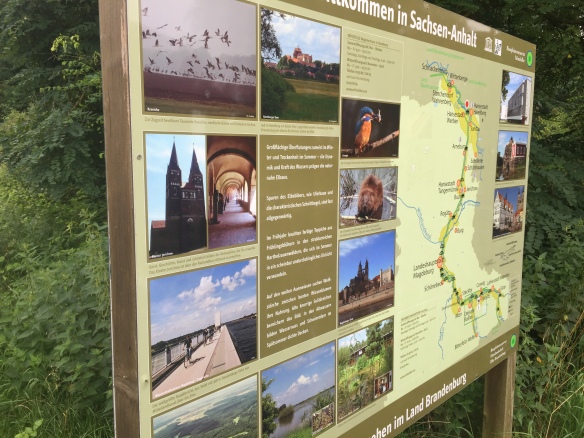 We stopped for sustenance in Havelberg:

The cafe soon filled up with older bikers: no problem, no worries, just banter in dialects/accents I can’t even pretend to understand. (Not that other people’s conversations are any of my business, of course!)

Then it started to rain…

The cycle-path surfaces were fairly good tarmac, albeit made lumpy in a few places by tree-routes. (There were a few miles on the equivalent of B-roads, with occasional cars passing at speed.) but quite a lot of the paths were made treacherous with sodden tree-litter. Not that much fun when all I wanted to do was either get dry or just watch Elly’s rooster’s tail.

I’ve not needed waterproofs on this trip before today. In fact, my feet stayed dry enough, my legs didn’t really notice the wet because they were working, and for the first hour or so of rain my top half was warm enough in a base layer and cycling jersey. The only change I really needed was to put on full gloves under my mitts.

But by the time we got to Rhinow, I was in need of the baked beans jacket and exploring the local shop’s vegan chocolate options. (There were plenty.) I also saw that my iPhone wasn’t charging from Lev’s dynamo. Changing charging cable made no difference, nor did eying to charge the phone from either of the two USB batteries. At our hotel, I could charge my old iPhone 5s using any of the cables, from mains or the batteries. Yet my main iPhone displayed the ‘I am charging’ logo, while the % of charge quickly fell to zero.

It lasted long enough to upload today’s few photos to WordPress, but the charging circuits or battery of my iPhone 6+ appear to be water-damaged, despite the phone being in a supposedly guaranteed waterproof case. Bah!

(The 5s’s digitiser is acting up too. (It’s taken me far too long to write this!) While it’s in a better design of waterproof case, its screen is too small for me to effectively navigate on the road.)

I know it’s only a thing, and far worse happens to many people every day, but I am anmoyed that my phone has possibly died, and maybe taken this trip’s photos with it.

court building across the road from our hotel

1 thought on “Pissed on, pissed off and caught short”