You do not want to be near my feet just now. Or maybe you do. If so, you only have yourself to blame. I’m horizontal on my bed in Hotel Heimfeld, in a southern suburb of Hamburg, feeling my soles tingle and steam.

I realise I don’t blog much about Elly. This is not because I don’t live her madly. I do. But it’s not my place to tell her story in public. If you want that, head to her blog and Facebook.

To be fair, if Heimfeld is truly a suburb of Hamburg (the actual city), then its southeast Scotland equivalent is somewhere like North Queensferry. Hamburg proper is north of the river Elbe. South of the city is a mass of docks and islands between the north and south branches of the Elbe, then there are suburbs such as Heimfeld. Fortunately, these are all linked by many forms of public transport, including an S-bahn. Here’s cyclemeter’ rendition of the journey from Hamburg hauptbahnhof to Heimfeld.

So how did we get here? We cycled, and I learnt something important. In fact I learnt three things:

Getting out of Bremen was a breeze. We may have simply been lucky about where we chose to go, but there was a brilliant bike (and local train) corridor. 4 miles flashed by with no effort, no traffic apart from other cyclists and a very occasional road crossing. As I commented on a Munich cyclist’s blog

And then I’ll buy Edinburgh roads department a cycling holiday in Germany and the Netherlands so they can learn what smooth tarmac/asphalt looks like, and how to integrate cycling in towns. (Escaping Bremen this morning was so easy, and there have been good surfaces most of our way so far.)

Despite the good surfaces, easy navigation, shelter and paths that were mostly to the sides of roads, I bonked quite badly. I didn’t stop because of it, but I was madly happy to stop in Rotenburg after just 29 miles.

Rearranging the luggage, an indifferent espresso, and some chocolate revived me. A milchkaffee and some chocolate tart did the same for Elly. The next stretch of cycling was much easier, not least because I could watch Elly and steal her slipstream. (If we have to go single-file, I prefer her to be ahead so I can’t lose her. German cycle-paths tend to be narrower and bumpier than Dutch ones, so looking back isn’t so easy. Lev’s mirror isn’t helping much just now. Perhaps I need to fit a periscope to my helmet.)

The next stop was in Tostedt, another 18 miles among the B75 towards Hamburg. Sustenance this time included rye-bread rolls, and a Bauerfrühstück (fried egg, ham, etc) sandwich. Up to you to guess who ate what. 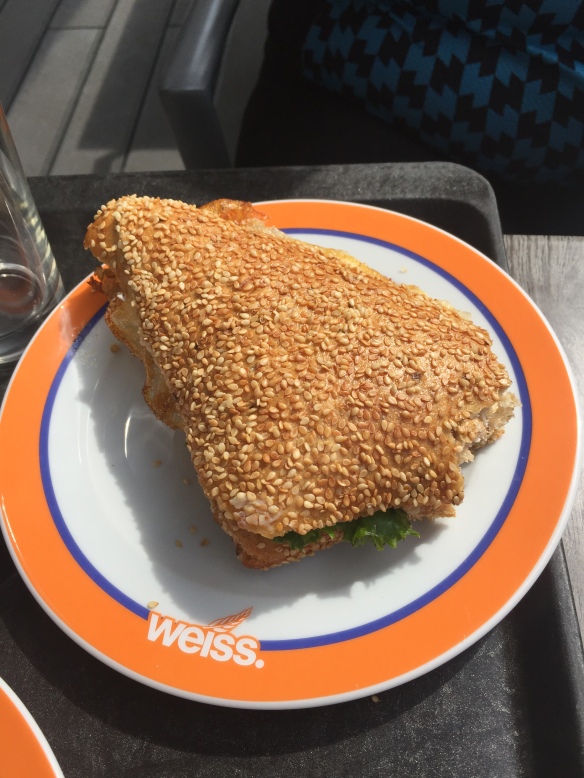 The last 18 miles were hard. My feet were complaining a bit. (I’m puzzled by this: my knees and thighs felt fine, and they are the bits that do the work!) There was occasional headwind, some absence of shelter from a hot sun, quite a lot of bumpy, tree-litter strewn surfaces, uncontrolled junctions and several miles of narrow path made of bricks laid parallel to the direction of travel. I could feel Lev’s back wheel trying to go sideways (sometimes left and right simultaneously), despite the heavy load.

Anyway, we got to Haimfeld about 6:30 after 65 miles. Here’s the cyclemeter map. My legs had more miles in them, but my hands and shoulders are somewhat the worse for wear, and my feet are feeling so glad to be out of their prisons. I think I need some lightweight sandals instead of so much clothing.

That’s probably enough proximity to my feet for you now. Here’s some photos of Haimfeld. Night-night!

Outside our hotel in Haimfeld 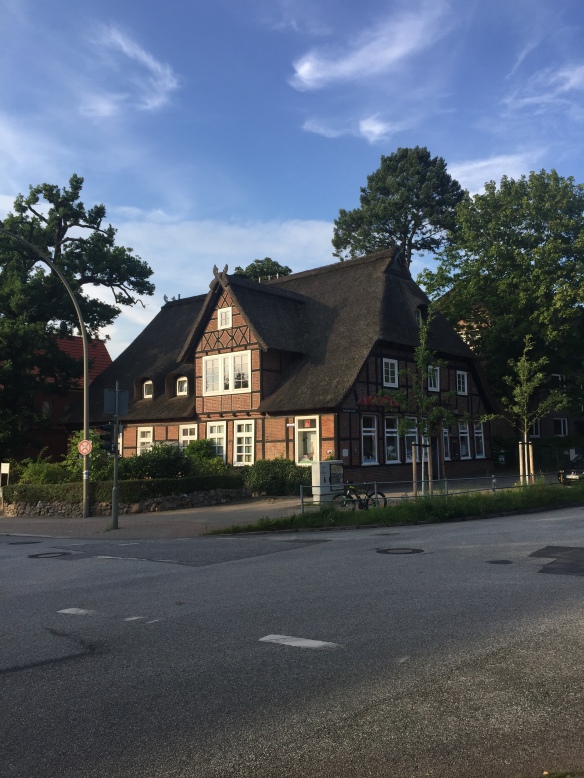 The local Apotheke is thatched!

Public toilets in the suburbs?