The Scottish Government has responded to questions raised by CC members at a fairly recent Fairer Scotland event. Click the thumbnail to download the full PDF. 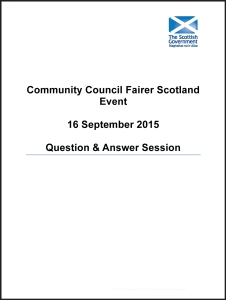 If you have any queries about the responses, it would be best to contact Kristoffer Boesen or Lynn Sharp of the Improvement Service (IS). In the meantime, I’m very pleased to see mentions of the work by Peter Cruickshank and me, specifically

This shows some of the impact of our work. I can’t quantify this impact yet: I don’t have analytics for the location finder, and it’s too early to say whether delegates and their peers are implementing the ideas raised in the workshops.

The rest of this post is purely my personal opinion, and has nothing to do with Napier or any of my colleagues there. If there is anything factually incorrect, I will happily amend it.

One of the issues discussed in the response is how the Scottish Government (SG) can support CCs. For me, this set of responses, the Fairer Scotland event, the digital engagement workshops, the Improvement Service project and similar demonstrate that SG is taking hyperlocal democracy seriously. (For the record, IS != SG.)

However, SG cannot do anything directly to CCs, even if that were desirable. The 1973 and 1994 Local Government (Scotland) Acts make it clear that CC are defined by Local Authorities.

So it is well-nigh impossible for SG to directly influence CCs without major changes in policy and/or legislation. However, what it can do, and is doing, is to work indirectly. It supports the Improvement Service (see answers 51 to 55), which is associated with the Convention of Scottish Local Authorities, in its work for CCs. It has contributed to the digital engagement workshops by funding them, by showing how CCs can take advantage of the Community Empowerment Act, and by being present so CCs members can talk directly with relevant civil servants. It is trying to listen, and within the limits discussed above, do what it can to heed CCs’ opinions.

I do not claim that everything is perfect. For a start, it’s almost crazy to describe CCs as hyperlocal government. They don’t govern anything, mostly they don’t provide services, no direct taxes are levied for such putative service provision, and they often claim that they are ignored by LAs and other, higher tiers of government and administration. (I’ve seen a couple of examples of central government over-riding CCs’ opinions on planning but I don’t have enough data to have an informed opinion.)

Nor am I naively shouting all power to the soviets! CC members are part-time volunteers. The beauty of this, for me, is that they bring experience from all sorts of careers, rather than being career politicians. However, this means they may not know how to handle the public exposure and other challenges associated with power. And what are we to do about the 200 or so CCs that don’t exist?

So, for me, it’s about evolution, partnership and power-sharing, so that whoever has power uses it to try (remember, there are no guarantees) to do things for their fellow citizens.