Breakfast at our hotel (rye bread and jam for me, then cycling through southeast Amsterdam towards Hilversum. There were a few route-changes where paths were blocked but this didn’t seem to be a problem except when I didn’t realise we were heading near a place but not going into it.

Lunch was at a Subway in Hilversum. I’ve also bought a data sim for my iPad so it can route-find and route map without hassling jPhone. (My UK O2 sim doesn’t do roaming data outside of the UK.)

We then pushed on past Amersfoort to the hotel north of Ede – about 58·5 miles today.

So tomorrow we cross our first land-border of this trip. Which passport will I wave?

Trek ‘cocoa chaos’ bars are delicious, and deliver good on-the-go sustenance (as far as I can tell). But the chocolate layer melts quite easily, and the wrappers are a bugger to open on the go, even using teeth. Cliff bars are slightly more accessible, and much less melty, and it’s easier to take smaller bits and return the rest to a maillot pocket. But best of all for perking up for the last few miles are glucose tablets.

Even more important than this, I’m discovering the delights of wearing civvies after a day’s cycling. Right now I’m wearing shorts and a t-shirt, not lycra. I’ve even not wearing socks with my sandals. 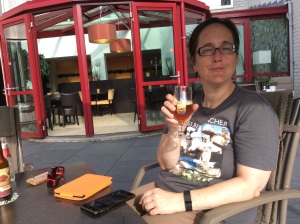 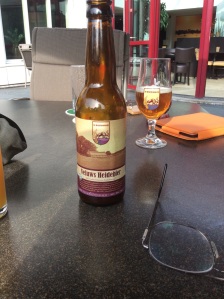 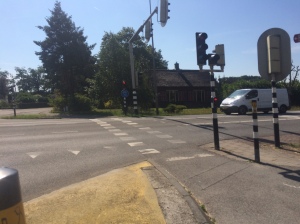 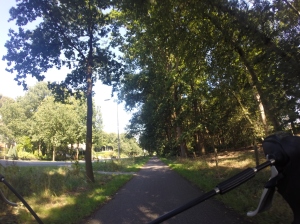 The first 2 hours of cycling through Amsterdam