In just over a week’s time, Elly and I continue our explorations of Euro-asphelt on Fidel and  Lev Davidovitch Bikestein. Lev and Fidel have both been feeling a bit cranky, so I put them in for servicing at the bike co-op whence they came.

The day after I put Lev in, the co-op phoned with some supposedly bad news: Lev’s frame had a small  but irreparable crack. They would replace the frame under warranty, but the new frame would be a slightly longer and grey, not black. They would re-use Lev’s original black front fork, so I’d have a piebald bike. I pondered – briefly –  renaming Lev to Jezzer Crusty Torvalds.

When I got Lev back, he was almost a completely new bike. As well as the new frame, he had new front forks because the old ones didn’t fit the new frame. He also had a new cassette and chain. So the only original parts were the handlebar, brakes, wheels, groupset and rear panner-rack. (I don’t count the front pannier-rack, luggage, phone-carrier, dynamo system and lights because they are aftermarket add-ons.)

So has Lev’s soul changed with major change to his body? To be honest, I don’t know. I do know he’s much easier to ride – at least two gears easier. But that may be due to G’s (this one, not that one) fine fettling, rather than a change in Lev’s character.

I do know that the new colours are fine: 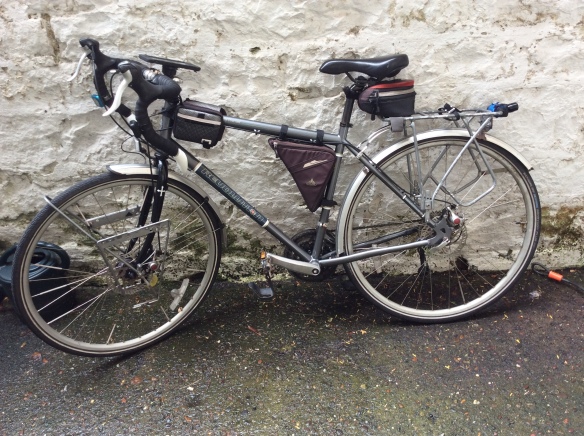 But I’ve got to dissuade Lev of his new religious affiliation! 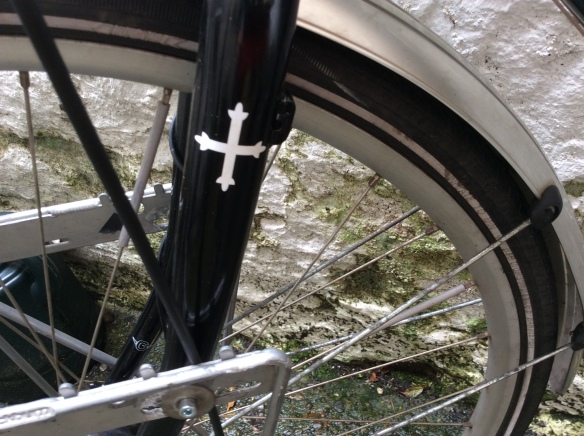