I gave my first ever presentation to students today: briefing them about how I would mark some of their work. I think it was successful, and the students asked some incisive questions.

Then the travels began:

view from my aeroplane seat

I think the ferry to Texel was possibly the best bit. Once I was on the ferry, I knew I could get to my hotel, even if I had missed the last bus. However, the best bit was that the bloke in the ferry ticket-queue bought my ticket. It added a couple of euros to his cost but he saw I was about to try to pay with plastic. We chatted about our lives and aims to each other. He is a plumber who lives on Texel. He makes good money, he says, then blows it in nights away from the island. He is comfortable with this so long as he is sure he does no harm. He sees doing no harm, and occasional acts of kindness, as being in his long-term interest. For example, I now have a positive memory of Texel, and so am more likely to return. Things like this will bring more visitors to Texel, so he and other islanders are more likely to have work. 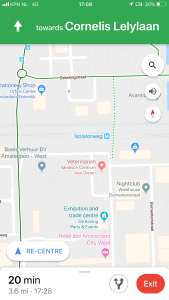 This followed a conversation with two older men on the train to Den Helder. They were convinced of the value of travel and people meeting each. However, they were sure that each place had its own people, or each people its place. They said that the Netherlands is a small country surrounded by larger ones, so it’s not likely to set out to cause problems. But it must be away of the acts and intentions of the neighbouring ‘sleeping giants’ (my words).

Naively I asked if they would consider enlarging their country by adding in the Flemish region of Belgium. Apparently not: the people there are Catholic, and the Protestant Netherlands fought for 80 years to get rid of Catholic (Spanish) rule. There is still feeling against Catholicism, so these men prefer the current situation, with Flemish Belgium being a buffer zone external to the Netherlands. 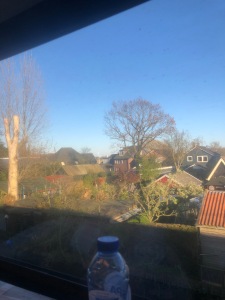 view from the train

They point out that Europe is composed of many different peoples and places, differences stemming from geography and history. I can’t deny this, and don’t try the ‘but aren’t we one species?’ question. Anyway, it’s evidence that these two chaps are unlikely to support ‘ever closer union’.

view from the train (movie)

With those conversations buzzing around my head, and a phone-call from Elly doing something to soothe it, I got to sleep after 2am UK time.